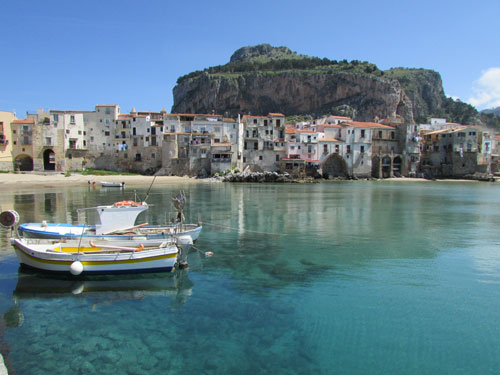 The cefalutano jargon, that is the one the fishermen, helps the students to go back to the etimo of Cefalù. The Pronounce of the fishermen is like "Cifalò", like Greek pronounce, Cef or Cif-alò. Cef means "head" or "extremity", top, or still "source of river" (Kefalion and Kefalis). Of these, "head" recalls us the massive rock that surpasses the City (the solution universal credited), while the "source of river", could be the rich water source that gushes to sea level.

The Latins called it Cephaledium from Kefaleidien. The sources that go back to the IV century a.C. speak about Kephaloidion or Kephaloidios. The Arabs who admired of the City the wealth of waters, the amenity of the places, the strong of the fortification, called it "Gafludi". Giovanni Boccaccio, big novelist, in one of hiss smaller work when he spoke about rivers, lagos, sources recalled of Cefalù the "Cefalino" which the aborigines called "river" ('u ciumi') that is the water that slides in the so-called "Lavatoio medioevale".

It was then Arabic bizantina and in the 858. Conquered in the 1083 from Ruggero the Normanno, under the son Ruggero II, king, had the large one privileges of being chosen from these which adoption center. Under Ruggero II for its will it came erected the splendid Basilica-Cathedral and the City had numerous privileges in earth and sea. The city of Cefalù was subject to noble families: Chiaramonte (1348), Ventimiglia (1352) that they returned to you in 1430. Declared, in 1451, state property city enjoyed some own prerogatives of the Cities. Between the 1500 and 1600 city it came fortified with bastions. The century of the illuminismo did not see Cefalù absolutely passive because it offered to the Sicily and to the world great men of culture like the enciclopedico Porpora Rosary while in the century of the Renaissance Cefalù it was active politicamente is in the revolt of 1820, than in that one of 1848. To the parliament of Ruggero Seventh Cefalù it gave three deputies: Antonino Lamb, Carl Ortolani di Bordonaro, Enrico Piraino di Mandralisca.